The VPX3U-P2000E-SDI-4IO module uses a WOLF chip-down design which includes both an advanced NVIDIA Quadro Pascal GPU and WOLF’s Frame Grabber eXtreme (FGX). This module accepts up to four simultaneous 3G-SDI inputs and CVBS/STANAG inputs. The video data can be routed to the Pascal GPU for processing or encoding, and then output in several formats, including up to four 3G-SDI, CVBS/STANAG, and optional output to DisplayPort, HDMI or DVI.

These modules are designed and manufactured specifically for use in the harsh environments encountered in military and aerospace applications. They have been designed to pass MIL-STD-810 and DO-160 environmental tests. They have been manufactured to IPC-A-610 CLASS 3 and IPC 6012 CLASS 3 for high reliability electronic products. They are compliant with IPC J-STD-001 soldering standards.

The WOLF Frame Grabber eXtreme (FGX) is the engine that provides the board with conversion of video data from one standard to another, with a wide array of video input and output options for both cutting-edge digital I/O and legacy analog I/O. The FGX has direct memory access (DMA) to the Quadro Pascal’s GPU memory for GPU processing and complex analysis. By including both the versatile FGX and a high performance Quadro Pascal GPU on one board WOLF’s I/O and processing solution avoids the SBC data rebroadcast traffic jams that commonly occur with a 2-board solution. 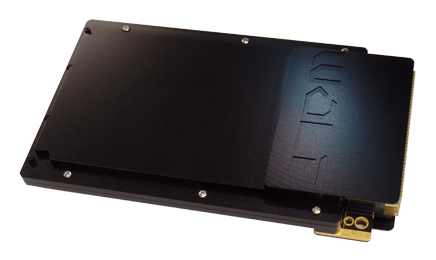 This product is currently in production as a COTS product with configurable options.
Contact WOLF to discuss your customization or MCOTS requirements.