NVIDIA GPU Architecture: from Pascal to Turing to Ampere

NVIDIA GPU Architecture: from Pascal to Turing to Ampere

This paper focuses on the key improvements found when upgrading an NVIDIA® GPU from the Pascal to the Turing to the Ampere architectures, specifically from GP104 to TU104 to GA104. (The Volta architecture that preceded Turing is mentioned but is not a focus of this paper.)

NVIDIA GPUs have always excelled at video graphics processing and in providing support for general purpose data processing that benefitted from massive parallel processing algorithms. In the update from Pascal to Volta/Turing NVIDIA also became a leader in artificial intelligence (AI) processing with the inclusion of Tensor cores, which were first introduced in the Volta architecture for data centers in 2017, followed by their introduction in the Turing architecture for desktop and other use cases in 2019. The Turing architecture also introduced Ray Tracing cores used to accelerate photo realistic rendering. With Ampere NVIDIA has continued to make significant improvements to the GPU, including updates to CUDA® core processing data paths and updates to the next generation of Turing cores and Ray Tracing cores. 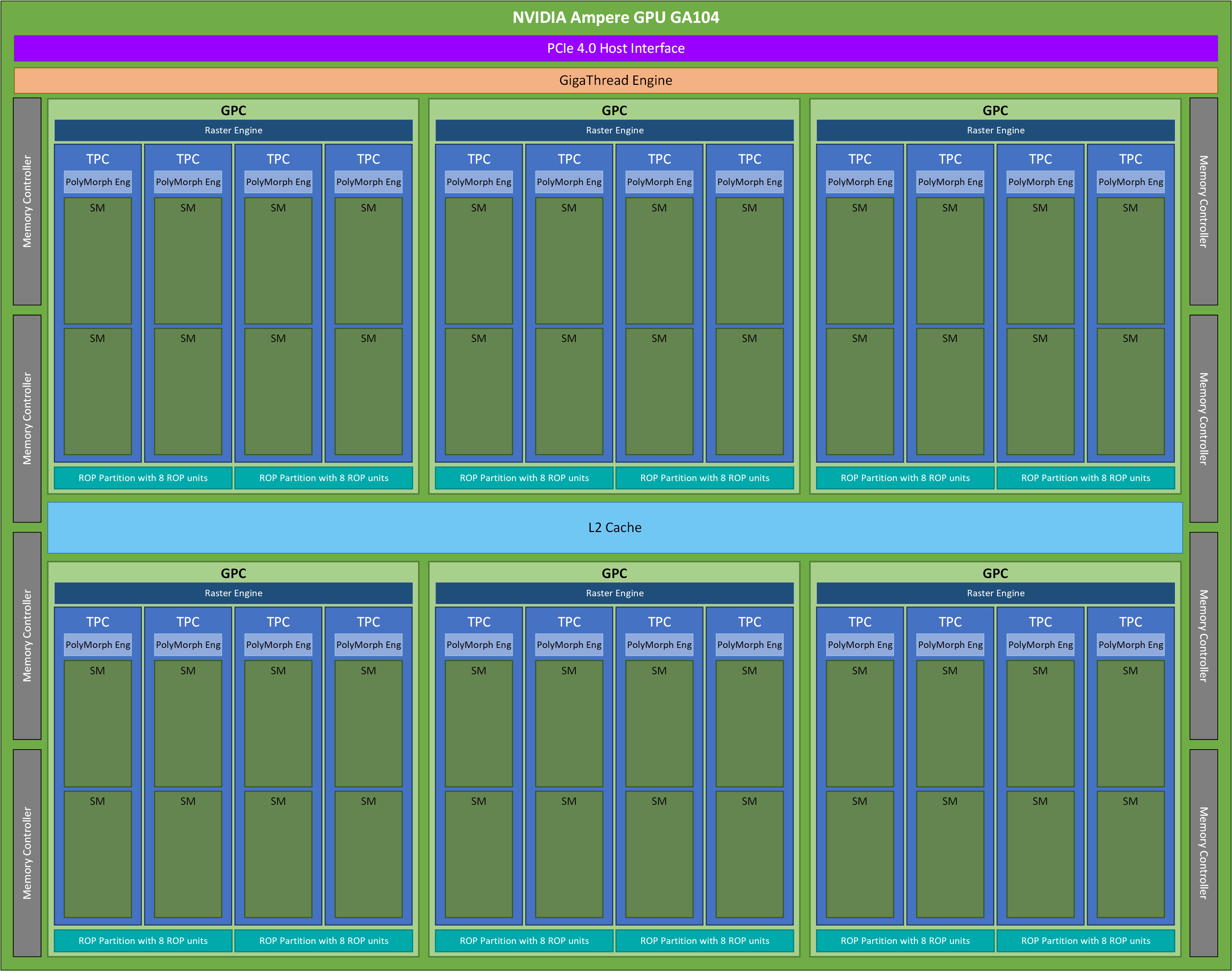 Figure 1: NVIDIA Ampere GA104 architecture. Details for each SM are shown in Figure 2.

The high-level components in the NVIDIA GPU architecture have remained the same from Pascal to Volta/Turing to Ampere:

PCIe Host Interface: The Ampere GPU updated the PCIe host interface to PCIe 4.0. This can provide double the bandwidth compared to Gen 3, and it is still fully compatible with the previous PCIe generation interfaces.

Memory Support: The Pascal GPU supported GDDR5 memory. The Ampere and Turing GPUs support GDDR6 memory. GDDR6 supports higher bandwidth, a bigger interface, and is more energy efficient than GDDR5. It is also higher density, so more memory can be included when using the same footprint.

Graphics processing clusters are the data processing engines of the GPU. Each GPC includes:

Raster Operator (ROP) Units: In Pascal and Turing architectures ROPs were tied to the memory controller and L2 cache. In the Ampere architecture ROPs are integrated into each Graphics Processing Cluster (GPC). Including ROP partitions in the GPC helps to eliminate bottlenecks. There are also a higher overall number of ROP units in Ampere GPUs.

Manufacturing Process and Power Efficiency: Chips are manufactured using processes that determine the size of each transistor on the chip measured in nm. The smaller the size is the faster the transistor will be and the less power it will use at the same performance level.

Display and Video Engine: With each generation support for higher resolution display output has increased, and when using an Ampere GPU with VESA Display Stream Compression (DSC) technology enabled High Dynamic Range (HDR) rendering is also supported. Hardware accelerated encoding and decoding have also continued to improve, offloading the most computationally intense tasks from the CPU to the GPU, providing real-time performance for high resolution encoding and decoding.

Major improvements have been made to many of the components found in the Streaming Multiprocessors in each subsequent generation.

Graphic workloads often require more FP32 calculations than INT32 calculations. In NVIDIA’s Turing Architecture whitepaper they estimated that in then current games “for every 100 FP32 pipeline instructions there are about 35 additional instructions that run on the integer pipeline”, or approximately 26% of the required operations for those games are integer operations. (See NVIDIA TURING GPU ARCHITECTURE, page 66) Given their unequal use ensuring that one of the Ampere SM data paths can flexibly be used for either FP32 or INT32 calculations ensures that there will be no idle cores waiting for INT calculation tasks as those cores can now be assigned FP calculation tasks.

Ampere Tensor cores also include a new Fine-Grained Structured Sparsity feature, which uses only the subset of weights that have acquired a meaningful purpose during the learning process, which leads to more efficient inference acceleration with sparsity.

The update from Pascal to Turing included an SM memory path redesign to unify shared memory, texture caching, and memory load caching into one unit. This provided two times more bandwidth and two times more capacity for L1 for common workloads. The amount of memory also increased from generation to generation.

In an NVIDIA GPU the basic unit for executing an instruction is the warp. A warp is a collection of threads that all share the same code and are all executed simultaneously by a Streaming Multiprocessor (SM). Multiple warps can be executed on an SM at once.

Pascal was designed to support many more active warps and threadblocks than previous architectures. Each warp scheduler was capable of dispatching two warp instructions per clock cycle.

Volta SM processing blocks each had a single warp scheduler and a single dispatch unit. This meant that Volta could only issue one independent instruction per clock cycle. However, it gained independent thread scheduling, it included a program counter and call stack per thread, and it included a schedule optimizer. Taken together this allows threads to diverge at sub-warp granularity, which helps to ensure optimal usage of the cores.

Turing and Ampere inherited all of the Volta improvements to warp scheduling, resulting in significant processing optimization.

CUDA Compute capability allows developers to determine the features supported by a GPU. Ampere GPUs have a CUDA Compute Capability of 8.6, Turing GPUs 7.5, and Pascal GPUs 6.1.

CUDA-X is a collection of libraries, tools, and technologies built on top of CUDA specifically to support AI and HPC. These libraries work with NVIDIA GPUs which include Tensor cores.

With the release of each new GPU generation NVIDIA has continued to deliver huge increases in performance and revolutionary new features. Whether an application requires enhanced image quality or powerful compute and AI acceleration, upgrading to the latest NVIDIA Ampere architecture will provide significant performance improvements.

NVIDIA, the NVIDIA logo, and CUDA are trademarks and/or registered trademarks of NVIDIA Corporation in the U.S. and other countries. Other company and product names may be trademarks of the respective companies with which they are associated. All other trademarks are property of their respective owners.